Idea Generation: How Do You Get Yours?

I’ve previously written on finding your creativity during a writer’s block – Five Tips to Help Find Your Creative Writing Mojo Again – or in fact, any block in creating, not just for writers. But let’s just assume you’re already feeling as creative AF and now you need to start work. What next? Where to begin? How do you create ideas to take your work or project forwards?

All ideas grow out of other ideas.

My ideas usually come not at my desk writing but in the midst of living.

An idea that is not dangerous is unworthy of being called an idea at all.

What is an Idea?

Let’s have a quick look first at what an idea actually is.

I like this definition by Dr Gerard J. Puccio, a professor at the International Center for Studies in Creativity at Buffalo State College, New York. He talks about ideas as a response to a gap of some sort:

An idea is a spark, a notion, a thought…something that you can take forward to a planning stage and then on to devising a strategy if you want to pursue your idea. 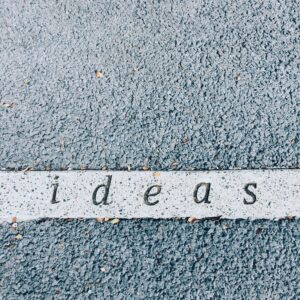 How Do You Get Ideas?

There’s plenty of articles and blogs on the ‘net about how to get ideas when you’re stuck – lots of methods that suit different people, depending on how your brain works best. I am very visual and like to ‘see’ things written down in front of me to help formulate my thoughts.

Below are three idea generation methods that I use regularly, sometimes in conjunction with each other, and they all work incredibly well.

But first, I start all of my ideas, projects and strategies with a whiteboard. It’s A3-sized and I have hung it onto my office door so I can write standing up. If I can’t get to a whiteboard, I’ve previously used brown Kraft paper pinned to the wall and drawn on that instead.

I also like my whiteboard because I can remove it from my office door and take it for a wander. If the weather is nice, I head outdoors and sit in the garden for some ‘good thinks’.

I usually start with chucking out words and free association onto my trusty whiteboard. From there, I find things usually connect together nicely. Questions about the topic also tend to pop up during this process, which helps me to move on to more concrete ideas and the planning stage. I use brainstorming as a first step in my ideas process and then integrate it with another method to help me move on to planning and strategy.

First made a popular concept by the late educational consultant and writer, Tony Buzan, Mind Mapping is an excellent visual method of idea generation, learning and improving memory through doodles. He first noticed the technique during his studying years, when he noticed that his neat and ordered long paragraphs of study notes were taking an age to produce, compared to other students who were achieving higher grades but with somewhat messier notes – lots of colour and doodles littered their study materials. Looking back in history, he discovered that notable figures of creativity and academia used drawings and doodles accompanied by words to probe theories, further research and breakdown concepts into easier-to-remember formats.

Mind Mapping is an excellent method if you’re a visual person and you like to doodle thoughts on paper.

This short video by Tony Buzan on YouTube nicely explains the concept of Mind Mapping.

This is one of the most effective idea generation methods for me. It frees up my head and helps me to focus, letting my creativity loose. Steve Jobs was a notable figure who used to walk to brainstorm and formulate strategies. He also used to have meetings with colleagues while he walked.

There is actually a scientific basis with exercise and creativity. The release within the body of endorphin hormones during work-outs are known to improve mood and produce the neurobiological ‘runner’s high‘ phenomenon. A study by Steinberg recorded a 25% improvement in mood following physical exercise, but the results also demonstrated that exercise had a marked improvement on creativity levels.

Whenever I’m out road-running, I regularly have lightbulb moments for articles I’m writing, content creation or strategy planning. I take my iPhone when I run as I use the Strava app, so I often use the Voice Memos app to record thoughts.

These are just a few thoughts I wanted to share on how ideas can be formulated and what works for me. Let me know in the comments of other idea and creativity methods that you love to use!